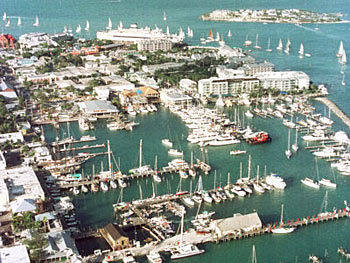 The Key West Bight is one of our hidden treasures. This gem of a waterfront is home to fishermen, restaurants, bars, landmarks, commercial boat operators and pleasure crafts. In the 1950’s the salty air was punctuated with the sights, sounds and smells of a large and vibrant shrimping fleet. Shrimping was another major Key West industry for many years, but like so many before it there was a boom and than a slowing down. The industry, it is said, blossomed when a wayward shrimp boat captain and his even more wayward crew failed to haul in their nets one evening, taking instead to the rum that was stored for emergencies. When they woke up the next day they found that the rum bottle was empty – surprise! – and that their nets were full of shrimp – bigger surprise! The shrimp here, called “Key West Pinks” are nocturnal and prefer to feed at night. Very soon the secret was out and the shrimp boat fleet grew in size and in importance. 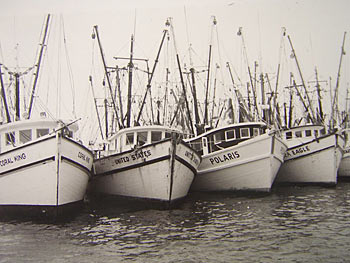 Captains and crew were called “shrimpers” a title the bore with pride, as their arrest records at the county jail show. They made their living from the warm waters and lived a hard but uncomplicated life. Prior to the shrimping industry, these same docks were home to spongers and turtle harvesters. Around the turn of the 20th century, sponging was a very profitable industry in Key West. The spongers were for the most part of Bahamian decent having arrived here in Key West to seek fame or fortune. They made a very good living for a few years, but ultimately, over-harvesting led to the demise of the industry. Today, sponges are once again abundant in the Florida Keys waters, thanks to the invention of synthetic sponges and a low demand for natural sponges. Today, many citizens of Key West still make a living from the water by sharing it with visitors. At the Historic Seaport, you can make plans to charter a fishing boat, snorkel over the coral reef, or go for a romantic sail aboard a tall ship. Don't wait until your Key West trip. Check out the Historic Seaport webcam from the Marker today.