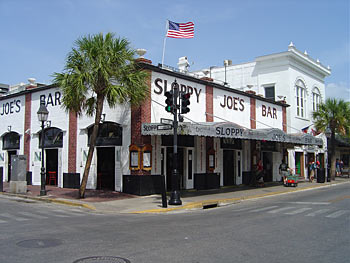 Sloppy Joe’s is one of the most visited places in Key West full of history and fun. Back in the 1920’s during Prohibition, Joe Russell, a boat captain, rum-runner and illegal speakeasy owner met Ernest Hemingway, who was looking to buy illicit bottles of Scotch, and the two struck up an enduring friendship. The day prohibition ended, Joe Russell became a legitimate saloon-keeper and proprietor of the Blind Pig, a droll, rundown building that Russell leased for three dollars a week. With the addition of a dance floor the bar was renamed, the Silver Slipper. It was Hemingway, a favorite patron of Russell's bar from the start, who encouraged its name change to Sloppy Joe's. The new name was adopted from the Jose Garcia Rio Havana club which sold liquor and iced seafood. 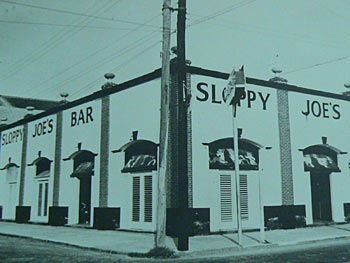 Because the floor was always wet with melted ice, the patrons taunted Joe with running a sloppy place... and the name stuck. Sloppy Joe's Bar opened the day Prohibition was repealed December 5, 1933. On May 5, 1937 Sloppy Joe’s moved to its current location (a Victorian built in 1917) where Russell paid $2,500 for it. In true Key West fashion, the bar never actually closed during the transition, customers simply picked up their drinks and carried them, along with the bar stools and everything else in the place, down the block to 201 Duval Street. Service resumed with barely a blink. The new Sloppy Joe's boasted the longest bar in town, a walled-off room often used for gambling, and life-size paintings of fighters on the walls. Also adorning one wall was a 119-pound sailfish caught by Hemingway.