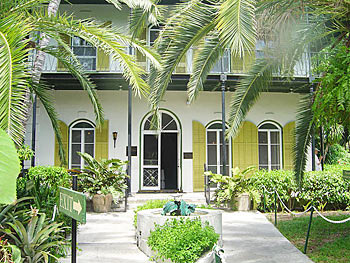 Almost everyone will have heard of Ernest Hemingway, one of our most famous resident authors and adventurers. He arrived in Key West by way of Havana with his wife Pauline. They were to pick up a car, a Ford Roadster, that Pauline’s uncle had promised them. The delivery was delayed and the couple stayed in Key West while waiting for the car. They fell in love with the laid back atmosphere and the incredible weather and for Ernest, the fishing. They moved to 907 Whitehead Street in 1931 and lived here for ten years. While here, Ernest would typically write during the early morning and then retire to visit his friend and fishing companion Joe Russell ( also know as Sloppy Joe!) during the rest of the day – and night! 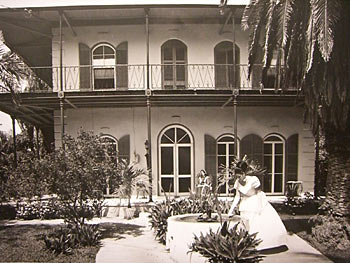 Their collection of antics and adventures earned them the nickname of the “Key West Mob” and it was around this time that Ernest picked up the nickname of Papa. He wrote prolifically while he was here creating “A Farewell to Arms” and “To Have and Have Not”, in which he used Depression-era Key West as the setting. This was his only novel set in the United States. Ernest and Pauline were divorced in 1939 and moved away from Key West to Cuba. The home remained in the family until 1961 when Hemingway committed suicide. One of the more famous aspects of the home is it’s current inhabitants –the 20 polydactyl (or six toed cats). Hemingway’s original cat was a 6 toed cat named “Snowball”. Polydactyl cats first arrived in the 1500’s aboard the Spanish ships. They were valued at sea because they were great at catching mice, and are actually considered good luck on a boat. In addition to the 20 Polydactyl cats, there are approximately 30 other cats that are cared for and fed by the museum staff.