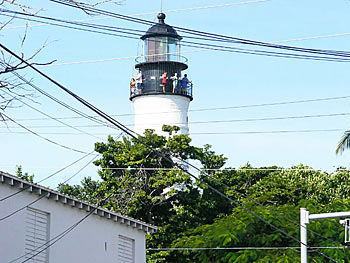 Built in 1825 the lighthouse was destroyed in a hurricane in 1846. When it was rebuilt in 1847, it was moved inland 3 blocks to where it is today, to protect it from future hurricanes. You can climb the 88 winding steps to the top for the best view of the island. The original lighthouse on this sight was only 47 feet high, but was built to its present height in 1894. In 1927, the modern age arrived with the oil lamps being replaced with an electric lamp that operated until the light house was deactivated in 1969. This is the only lighthouse in the USA that is entirely within the city limits. It is also one of the very few that is “inland” – or not sitting by the very edge of the water. There is also a house on the grounds across from of the Lighthouse. 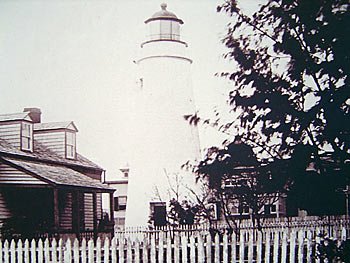 Even in the 1800’s it was usual for the light keepers to have some form of accomadation provided as they needed to be on duty 24/7. In Key West the keepers cottage was split into two sections to permit the Keeper and the assistant to both live on the property. It is said that the young daughters of the Keeper and his assistant were always “home schooled” and that one of the subjects they were taught was “light housekeeping”.