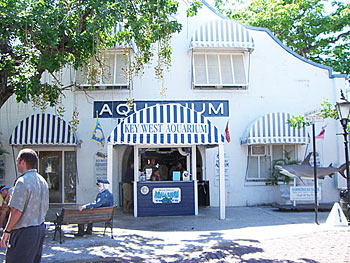 During the Great Depression, Key West fell on hard times and ultimately turned over its charter to the federal government. The federal government believed Key West, with its great weather and location, would make a wonderful tourist destination. From 1932 to 1934 The Works Project Administration was sent in to build the Key West Aquarium. The Aquarium was originally open air, and the first and largest at the time.

Today, it is nearly twice the size of the original with the addition of the Atlantic Shores exhibit and the large outdoor holding pens. Meet the undersea world of the Florida Keys, sea turtles, sting rays, sharks and many other sea creatures. Hold a conch shell, sea cucumbers, and horseshoe crabs.