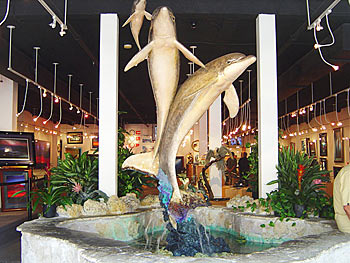 Recognized as the world’s leading marine life artist, Wyland uses his art to increase awareness about the ocean environment and its inhabitants—as well as the need to preserve and protect that environment. Both a painter and sculptor, he is best known for the nearly 100 detailed, life sized murals of whales, dolphins, and marine life that he as painted in cities around the world. In 2007 Wyland was commissioned to paint his 100th Whaling Wall on the Great Wall of China. Inside the Wyland Gallary you will view majestic whales, playful dolphins, serene manatees and vibrant reef life depicted in original oils and watercolors as well as magnificent bronzes, acrylic sculptures and unique art gift items. 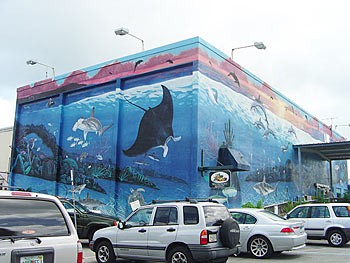 Wyland began as a struggling artist in Laguna Beach, California with his own gallery. He asked his neighbor, if he could paint his wall and he did with oversized sealife. Wyland’s mom told him he needed to make money from doing this and so Wyland decided he was going to paint 100 Whaling Walls in 30 years. In 2007 Wyland was commissioned to paint his 100th wall on canvas covering 10 miles of the Great Wall of China. The unvailing will be the day before the 2008 Olympic games.